Famous trees come and go. LArbre du Tenere was once considered the most isolated tree on Earth, a landmark on caravan routes in the Sahara, until it was knocked down by a drunk Libyan truck driver in 1973. This year in August, the famous Anne Frank tree in Amsterdam was blown down by high winds during a storm. Luckily, there are still many special trees out there. An overview of the most famous trees in the world.

Arbol del Tule, a Montezuma Cypress, is located in the town center of Santa María del Tule in the Mexican state of Oaxaca . It has the stoutest trunk of any tree in the world although the trunk is heavily buttressed, giving a higher diameter reading than q true cross-sectional of the trunk. It is so large that it was originally thought to be multiple trees, but DNA tests have proven that it is only one tree. The tree is estimated to be between 1,200 and 3,000 years old.

The Cotton Tree is an historic symbol of Freetown, the capital city of Sierra Leone. According to legend, the Cotton Tree became an important symbol in 1792 when a group of former African American slaves, who had gained their freedom by fighting for the British during the American War of Independence, settled the site of modern Freetown. They landed on the shoreline and walked up to a giant tree just above the bay and held a thanksgiving service there to thank God for their deliverance to a free land.

The Boab Prison Tree is a large hollow tree just south of Derby in Western Australia. It is reputed to have been used in the 1890s as a lockup for Indigenous Australian prisoners on their way to Derby for sentencing. In recent years a fence was erected around the tree to protect it from vandalism. 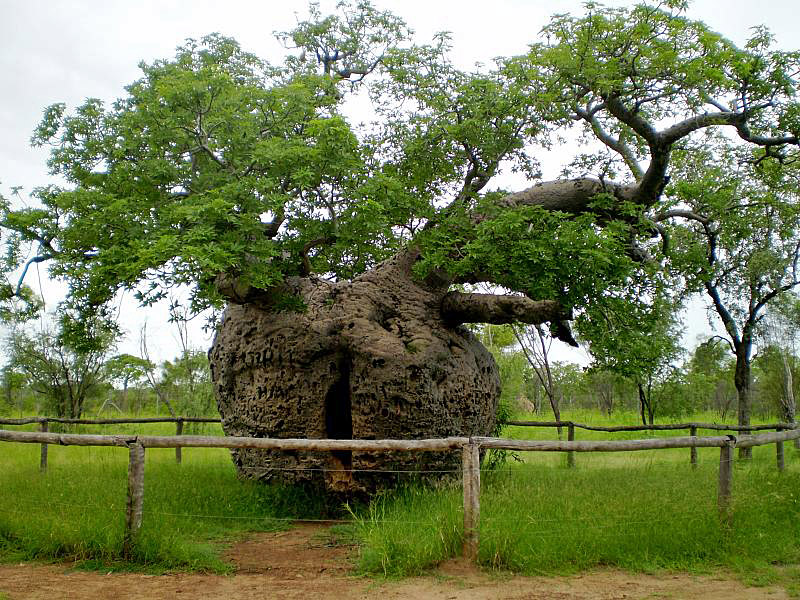 The Major Oak is a huge oak tree in the heart of Sherwood Forest, Nottinghamshire, England. According to local folklore, it was Robin Hood’s shelter where he and his band of outlaws slept. The famous tree is about 800 to a 1000 years old. In 1790, Major Hayman Rooke, a noted antiquarian, included the tree in his popular book about the ancient oaks of Sherwood. It thus became known as The Major‘s Oak.

The Lone Cypress Tree near Monterey is probably the most famous point along the 17-Mile Drive, a scenic road through Pacific Grove and Pebble Beach. The road winds through miles of breathtaking coastal views of the Pacific, with turnouts along the way at the most historical and picturesque sites. The Monterey Cypress is a species of cypress that is endemic to the Central Coast of California. In the wild, the species is confined to two small populations, near Monterey and Carmel.

The Tree of Life in Bahrain is a mesquite tree which grows in the middle of desert. The tree is said to be 400 to 500 years old. Its long roots probably have found some underground water source, but it is still a miracle as it is the only green living organism living in a vast and barren desert. The local inhabitants believe that this was the actual location of the Garden of Eden.

The Dragon blood tree is arguably the most famous and distinctive plant of the island of Socotra. It has a unique and strange appearance, having the shape of an upside-down umbrella. This evergreen species is named after its dark red resin, that is known as “dragon’s blood”. The bizarre shape enables the tree to have optimal survival in arid conditions. The huge packed crown provides sufficient shade in order to reduce evaporation.