Dubai has built a reputation in the last decade of being one of the world’s wealthiest cities and a place of modern spectacle. Having some of the most awe inspiring symbols of the modern era such as the world’s largest shopping centre and the world’s tallest building, there is much for visitors to see. You don’t need to be a millionaire or even have a taste solely for the finer things to enjoy this Middle Eastern gem – Dubai truly is for everyone.

Beyond those things that are new, there is also a touch of the past here in Dubai as people can still visit the city’s historic district Bastakiya Quarter and view ancient mosque sites. While in Dubai there will be something new and something old to see and plenty of opportunity for varied outdoor activity. Some great things to do in Dubai include: 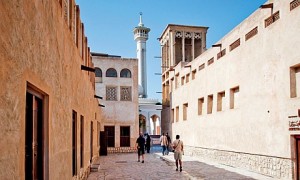 In a city that has torn down so much of what was there before to make room for the modern opulence and spectacle that is now contemporary Dubai it is nice to see a district where some of the city’s past remains. The Bastakiya Quarter was largely populated by Persian Traders who made Dubai into their home in the early 19th century. With Dubai’s thriving economy then, same as now, these traders constructed beautiful mansions that now have become the cultural institutions, sheesha cafes and art galleries that make this district so special. The Bastakiya Quarter is located near to the Dubai Museum along the south bank of Dubai Creek. Be prepared for many of the establishments to close their doors between 1 – 4 PM during the day’s hottest hours.

At the foot of Burj Al Arab is Dubai’s ultimate cool down spot the Wild Wadi Waterpark. Actually connected to the story of Sinbad and the legend of Juha; where Juha and his children were ship wrecked on a island that just so happened to have streams and waterfalls that allowed them to all live out their lives leisurely. Such is the case at the waterslides where families go to enjoy a warm day in the same leisure as Juha once did. Full of different attractions families easily spend a full day here having abandoned the desert heat for the parks refreshing waters. The water park is open each day from 10 a.m. until its close between 6 and 8 pm. (depending on the time of year). And the easiest thing is you easily get Dubai visit visa.

Author Bio: Annie found it really hard to think of just a few things to see and do in Dubai after hearing all about it from her friends who have lived there for a few years. Thanks to Travelbag, she might be heading there sooner than she thought – and she can’t wait:)

This article has been sponsored by Travelbag