Remember how your mom and pretty much everyone else goes on about the importance of making a good first impression? You want to put your best foot forward, smile politely and make sure you’re wearing clean pants the first time you meet someone because you only get one chance to meet them the first time and if you don’t do a good job, there might not be a second! Travelling is a lot like meeting people for the first time and when you go to a city or a country for the first time you are that Judgemental Jeremy who gets to critique a place. Sure, you may have heard great things from someone else – but you aren’t them! 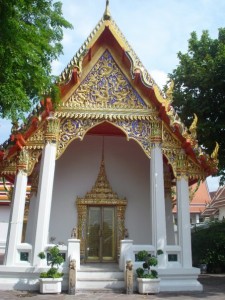 When I first found out I was going to Thailand, I was super excited because I had heard so many good things about it. One of my bestest friends in university was from Thailand and I always wanted to see where she was from and see this place that just seems so different than what I was used to. Well I was in for a surprise, that’s for sure!

So many people seem to go to the beach destinations further south but I was only able to be there for a few days so I opted to spend my time in the capital, Bangkok. I’m not going to make the unfair assumption that the whole of the country is like this crazy metropolis but from what I understand, many of the things I experienced were very similar to those elsewhere.

The first thing I noticed when I arrived in Bangkok was just how pushy everyone was. Prior to going to Bangkok I had been to a few different spots in Europe and various other cities in Asia, but there was something about the pushiness of this particular city that threw me off. From cab drivers as soon as I got out of the airport to the people on the streets… it was a bit much!

Another thing that jumped right out at me were the pictures of the King everywhere. If you’ve never been to Thailand or somewhere with a crazy dictator (Thailand’s king isn’t a crazy dictator, but giant pictures seem to be a common thing between the two!), seeing this kind of display is kinda nuts.

Oh yeah – and what’s up with all the girls looking like they’re prostitutes? I would later find out many of the ones on the streets were and many of the ‘girls’ were in fact lady-boys, which was something I had never imagined before! I guess I know where the term streetwalker comes from… maybe I’m just too sheltered?

The biggest thing that hit me though was how I just didn’t feel safe and that made me feel guilty. I knew Thailand was probably a lovely country with great people and I would be in good company with those I’d meet, but for the first little while I was not comfortable to go out on my own – and I don’t like that in a destination!

Now, keep in mind, these were just my first impressions as I did warm up the place by the end and it has left me wondering about the rest of the country. I guess I’ll just have to go back and see it again at some point and see if it or I have grown any!